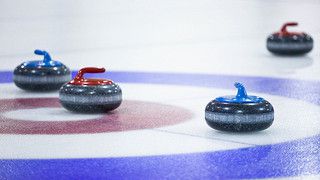 Canada is a powerhouse in the world of curling, having won an impressive 27 out of 42 Men's World Championships since the tournament's inception. This is more than any other nation, making Canada the undisputed leader in the sport. With a long history of success, it's no wonder that curling is so popular in Canada, and that the country continues to produce some of the best curlers in the world.


2. The History of Curling at the Olympics

Since 1998, Curling has been a part of the Olympic Games, providing athletes with an exciting and unique opportunity to compete on the world's biggest stage. The sport has been a fan favorite since its debut, with its strategic gameplay and intense competition captivating audiences around the world. Curling has become a staple of the Winter Olympics, and its popularity continues to grow with each passing year.

Paul Gowsell, a curling player, earned himself the nickname "Pizza Paul" after ordering a pizza to the ice level during a match. The pizza was delivered to the ice level, and Gowsell enjoyed it while still playing the match. This unique move earned him the nickname, which has since become a part of curling history.

The tragedy of the Titanic disaster in 1912 was felt far and wide, even in Halifax, Canada. In response to the tragedy, a curling rink in Halifax was used as a temporary morgue for the bodies recovered from the Titanic. The rink was transformed into a makeshift morgue, with the ice removed and replaced with caskets and coffins. The rink was used to identify and bury the victims of the disaster, and the tragedy left a lasting impact on the city of Halifax.


5. The History of Curling

Curling, a beloved winter sport, has a long and storied history. It was first founded by Scots in 1541, making it one of the oldest sports in the world. The game was originally played on frozen ponds and lochs, and the stones used were taken from the nearby riverbeds. Over the centuries, the game has evolved and spread to countries all over the world, with the World Curling Federation being established in 1966. Today, curling is enjoyed by millions of people, and is a popular Olympic sport.

Also → Nairobi's Solar Ice Rink is the largest in Africa

6. The World of Curling

With an estimated 1.2 million registered curlers worldwide, curling has become one of the most popular winter sports. From Canada to Sweden, curling clubs are popping up in countries across the globe, with the World Curling Federation boasting members from over 40 countries. The sport has grown in popularity due to its accessibility and the fact that it can be enjoyed by people of all ages and skill levels. Whether you're a beginner or a seasoned veteran, curling is a great way to stay active and have fun during the winter months.

Also → The Fastest Sport in the World: Badminton

7. The World of Curling


8. The Precision and Skill of Curling

The sport of curling requires a great deal of precision and skill, and the equipment used is just as important. The maximum weight of a curling stone is 44 pounds (20 kilograms), and the stones are made of granite and are precisely shaped and polished to ensure they slide smoothly across the ice. The weight of the stone is important, as it affects the speed and distance the stone will travel. The stones are also designed with a handle on top, allowing the player to control the direction and speed of the stone.

Also → The History of fencing

9. The Stone That Keeps on Curling

The sport of curling has a long and storied history, with the oldest known curling stone bearing the date 1511. This remarkable stone, which is believed to have been crafted in Scotland, is a testament to the longevity of the sport, which has been enjoyed by generations of people for centuries. The stone itself is a reminder of the skill and craftsmanship of the people who created it, and serves as a reminder of the importance of preserving the traditions of curling.

10. The History and Culture of Curling in Canada

In Canada, curling is a beloved sport that is just as popular as ice hockey. It is a team sport that involves two teams of four players who take turns sliding stones across a sheet of ice towards a target area. The goal is to accumulate the highest score by having the stones closest to the target. Curling has been a part of Canadian culture for centuries, and it is still enjoyed by many today. It is a great way to stay active and have fun with friends and family.

Short about Curling
Curling is a sport in which players slide stones across a sheet of ice towards a target area.