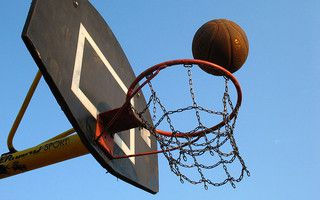 Fact 2
The first basketball game took place in 1892, where the court was half the size of today's courts. The sport was invented by Canadian-American sports coach James Naismith. The first game was played for 30 minutes, and only one point was scored in the match.

Fact 4
Basketball was first played by a soccer ball until it was changed in 1929. At first, the official basketball was brown and it wasn't until in the late 1950s that an orange ball was introduced in order to make the ball more visible for players and spectators.

Fact 5
Michael Jordan is considered to be one of the best basketball players in history. His record score of 32,292 points during his career made him a legend in the world of basketball. As of July 2021, the all-time scoring leader is Kareem Abdul-Jabbar with 38,387.

Fact 7
In 1967, slam dunks were banned from the game due to safety reasons and the fact that many didn't think it was a so-called "skillful shot"; nine years later it was allowed again.

Fact 8
The first basketball hoops were like a peach with a bottom, and every time the team scored, the referee would climb a ladder to get the ball. A hoop with a bottom cut out to allow the ball to fall through was introduced in 1906.

Fact 9
WomenÂ´s basketball was developed the same year as its menÂ´s counterpart. However, some rules were modified to fit women. 1896 marked the first intercollegiate women's basketball game between Stanford University and the University of California, Berkeley.


is a retired American professional basketball player who played point guard for the Los Angeles Lakers of the National Basketball Association (NBA) for 13 seasons.


is an American former professional basketball player who currently serves as an assistant coach with the Miami Heat of the National Basketball Association (NBA).


is an American former professional basketball player, entrepreneur, and majority owner and chairman of the Charlotte Bobcats.


is a Congolese American retired professional basketball player who last played for the Houston Rockets of the National Basketball Association (NBA).


is an American professional basketball power forward and center with the Brooklyn Nets of the National Basketball Association (NBA).