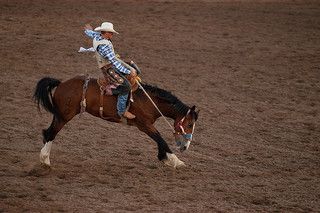 1. The Bull Riding Event of a Lifetime

The Professional Bull Riders (PBR) is the largest and most successful bull riding event in the world. It has been around since 1992 and has grown to become the premier bull riding organization in the United States. The PBR has seen tremendous success, with over $100 million in prize money awarded to riders since its inception. The PBR also hosts the annual World Finals, which is the most prestigious bull riding event in the world. The event draws thousands of spectators and millions of viewers from around the globe, making it one of the most popular and profitable rodeo events in the world.


2. The History and Evolution of the Rodeo

Rodeo is a sport that has its roots in the industry of working with animals. It began as a way for cowboys to show off their skills in handling livestock, such as roping, riding, and branding. Over time, it has evolved into a competitive sport, with events such as bull riding, steer wrestling, and barrel racing. Today, rodeo is a popular spectator sport, with millions of fans around the world. It is a testament to the skill and courage of the cowboys and cowgirls who continue to work with animals in the rodeo industry.

3. The Best of Both Worlds: Judging and Timing Rodeo Events

Rodeo contests come in two varieties: judged and timed. In judged events, a panel of experts evaluates the performance of the rider and the animal, awarding points for skill and finesse. Timed events, on the other hand, are all about speed. Riders must complete a course in the fastest time possible, with penalties for errors or missed obstacles. Both types of rodeo events require a great deal of skill and courage, and the best riders are those who can combine speed and accuracy.

4. The History and Art of Roping

Rodeo roping contests have a long and storied history, having originally developed from the practice of cowboys who would rope and hold cattle for doctoring. This practice was essential for the care of the animals, and over time, it evolved into the competitive sport of rodeo roping that we know today. The roping event is one of the most popular and exciting events in rodeo, and it requires a great deal of skill and precision to be successful.


5. The Truth About Rodeos

Rodeos are a popular form of entertainment, but many people don't realize that the animals used in them are usually domesticated and not naturally aggressive. In order to create the thrilling show that spectators enjoy, the animals are provoked to act in a more aggressive manner than they would normally display. This is done through the use of various techniques, such as the use of electric prods, flank straps, and bucking straps. Despite this, the animals are still well cared for and respected by the rodeo staff.

Also → The Extreme Sport of Scootering

6. The History of the PRCA's Commitment to Animal Welfare

In 1947, the Professional Rodeo Cowboys Association (PRCA) established a set of rules to ensure the humane treatment of animals in rodeo events. These regulations cover everything from the proper handling of livestock to the use of protective equipment for both the animals and the riders. The PRCA's commitment to animal welfare has been a cornerstone of the sport since its inception, and continues to be a priority today.

Also → The Fort Worth Stock Show and Rodeo


8. The Most Dangerous Sport on Earth

Rodeo has become a beloved sport for many, and its most popular contest is bull riding. This event requires a great deal of skill and courage, as riders must stay atop a bucking bull for eight seconds while holding onto a flat braided rope. Bull riding is a fan favorite, and the competition is fierce as riders from all over the world compete for the title of world champion.

9. The History and Thrilling Sport of Rodeo

Rodeo is a sport that originated in the United States and is based on the skills of a cowboy or cowgirl. The term "rodeo" is derived from the Spanish word "rodear" which means "to go around". This is in reference to the circular motion of a cowboy or cowgirl riding a bucking horse or bull. Rodeo events include bull riding, steer wrestling, team roping, barrel racing, and more. It is a thrilling sport that has been popular in the United States for over a century.

Also → The History of Freestyle BMX

10. Cowboy Contests: A History and Legacy

Although the term "Rodeo" was rarely used to describe the American cowboy sport until the 1920s, it was more commonly referred to as "cowboy contests". These contests were held in the late 19th and early 20th centuries, and typically involved a variety of events such as calf roping, steer wrestling, and bull riding. The contests were often held in conjunction with county fairs and other large gatherings, and were a popular form of entertainment for both participants and spectators. By the 1920s, the term "Rodeo" had become more widely used to describe these cowboy contests, and the sport has since become a beloved part of American culture.


is an extreme sport which involves using scooters to perform freestyle tricks, in a manner similar t


Is a highly acclaimed American actor, playwright and director of film and television.

Short about Rodeo
Is a competitive sport which arose out of the working practices of cattle herding.