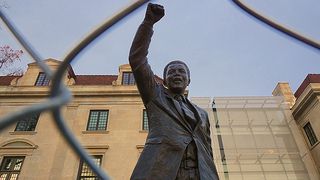 Fact 1:
Nelson Mandela was the first South Afrikan President who was elected in a completely democratic election.

Fact 2:
Nelson Mandela was an activist against apartheid, and he was the leader of the armed wing of the African National Congress.

Fact 3:
Nelsom Mandela spent twenty-seven years in prison, many of those years were spent on Robben Island.

Fact 7:
In his spare time, Nelson Mandela studied to become a lawyer.

Fact 10:
Nelson Mandela retired from Public life in June 1999 and currently resides in his birth place.


Is a country situated in West Africa and officially known as the Republic of Liberia.


is an American professional golfer whose achievements to date rank him among the most successful golfers of all time.


Is a Hollywood film actor, screenwriter and producer.


is an American football quarterback for the Dallas Cowboys of the National Football League (NFL).


Was the second president of America, widely famous because of several historical events that marked his presidency


Adventure gave its name to the computer adventure game genre, and originally designed by Will Crowther

Short about Nelson Mandela
Served as President of South Africa from 1994 to 1999.