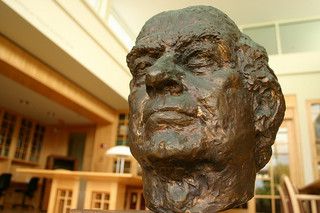 Fact 2
Pauling was one of the pioneers and founders of, theories of quantum chemistry and molecular biology.

Fact 3
As a young child, Pauling was a voracious reader and had interest in studying chemistry. Later he also set up a small lab by the name Palmon Laboratories, with the help of his older friend Lloyd Simon.

Fact 4
He was an alumnus of the Oregon state University and also established one of its fraternities, the Delta Epsilon. It was at university that he was introduced to the concept of quantum mechanics.

Fact 5
While Linus Pauling was an assistant professor at Caltech for theoretical chemistry, he continued his study in X-ray crystal and performed numerous quantum mechanical calculations on atoms and molecules.

Fact 6
Pauling established the concept on electronegativity in the year 1932 and established a scale called 'Pauling Electronegativity Scale', which had a numerical value associated to most of the elements. It was extremely useful predicting the nature of bonds between atoms in molecules.

Fact 7
His earlier work in biochemistry included the study of the structure of hemoglobin and he later demonstrated that when a hemoglobin molecule loses or gains an oxygen atom, it changes its structure.

Fact 8
Linus Pauling closely studied enzyme reactions and was the first to note the fact that, by stabilizing the transition state, enzymes bring about reactions which was a basis for understanding the mechanism of their action.

Fact 9
Linus Pauling was awarded the Nobel Prize in Chemistry, in 1954 for his work in the field of Science.

Fact 10
He took active participation in peace activism after the Second World War and was awarded the Nobel Peace Prize in 1962.


was a British chemist, credited with the development of protein crystallography


Is renowned for creating an effective Periodic Law and Periodic Table of Elements that embellishes every chemistry classroom in the world.


Was an eminent German chemist who won the Nobel Prize for Chemistry in 1902 and was best known for his influential research regarding the purines and the carbohydrates.

Short about Linus Pauling
Was an American chemist, bio-chemist, author, educator and peace-activist.