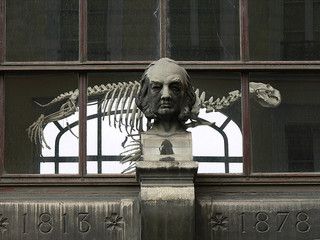 Claude Bernard, a renowned French physiologist, was born on the 12th of July 1813 in the small village of Saint-Julien, France. He is remembered for his pioneering work in the field of physiology, and his contributions to the scientific community are still felt today. He passed away on the 10th of February 1878, leaving behind a legacy of groundbreaking discoveries and theories that have shaped the way we understand the human body.


2. The Unforeseen Path to Medical Success

As a young boy, Claude Bernard had a passion for writing vaudeville comedy, and was highly successful in it. His work was so well-received that it even caught the attention of play critics, who, instead of praising his work, encouraged him to pursue a career in medicine. This unexpected turn of events ultimately led to Claude Bernard becoming one of the most renowned scientists of his time.

3. The Influence of Francois Magendie on Claude Bernard

Claude Bernard, the renowned French physiologist, began his career with an internship at the renowned Hotel-Dieu de Paris, under the tutelage of the famous physiologist Francois Magendie. During his time there, Bernard was exposed to a wealth of knowledge and experience, which would later prove invaluable in his own research and discoveries. Magendie was a pioneer in the field of physiology, and his influence on Bernard's work was immense. Bernard's time at Hotel-Dieu de Paris was a crucial step in his journey to becoming one of the most influential figures in the history of physiology.

Claude Bernard was a pioneering scientist who made significant contributions to the field of physiology. His initial work focused on the study of the functions of the pancreas, and his research on the importance of the digestive juices it secretes earned him an award from the French Academy of Sciences. His findings revealed that the pancreas plays a vital role in the digestive process, and his work laid the foundation for further research in this area.

6. The Discovery of Diabetes

Claude Bernard is renowned for his groundbreaking work on the glycogen function of the liver, which ultimately led to a greater understanding of the root cause of diabetes mellitus. His research revealed that the liver stores and releases glycogen, a form of glucose, in response to the body's needs, and that an imbalance of this process can lead to diabetes. His findings revolutionized the medical field and provided a foundation for further research into the causes and treatments of diabetes.

7. Physiologist Who Discovered the 'Milieu Interieur'

Claude Bernard is renowned for his pioneering work in the field of physiology, particularly his discovery of the concept of the 'Milieu Interieur', which states that the body's internal environment must remain stable in order for it to function properly. He also made significant contributions to the understanding of the physiological action of poisons, particularly curare and carbon monoxide gas. His research on these substances helped to shape our current understanding of how they interact with the body and the effects they can have on our health.


8. The Father of Vivisection

Claude Bernard was a pioneering scientist who was a major proponent of vivisection in Europe during the 19th century. He believed that the practice of vivisection was essential for advancing scientific knowledge and understanding of the human body. As a result, many of his theories and discoveries were made through the use of vivisection, which allowed him to gain a deeper insight into the workings of the human body. His work was highly influential in the development of modern medical science and his legacy continues to this day.

Also → Humphry Davy: Chemist who made a significant contribution to the field

Claude Bernard is a renowned French physiologist who is credited with the discovery of the vaso-motor system, a network of nerves that control the diameter of blood vessels. His groundbreaking research established the existence of vaso-motor nerves, which are responsible for regulating the flow of blood throughout the body. His discoveries have had a profound impact on the field of physiology, and his work continues to be studied and referenced today.

Also → The Life and Work of Robert Koch

Claude Bernard, a French physiologist, is renowned for his set of theories on scientific method, which he outlined in his book 'An Introduction to the Study of Experimental Medicine'. In this book, Bernard explains the criteria for a good scientific theory, emphasizing the importance of experimentation and observation in the scientific process. He also emphasizes the need for objectivity and accuracy in the interpretation of data, as well as the importance of replicating experiments to ensure the validity of results. Bernard's theories have had a lasting impact on the scientific community, and are still widely used today.

Short about Claude Bernard
Was a French physiologist.